Hello, adventurers! Before we begin our adventure together, I’m sure you’ve got some questions for me about space, the ISS, and being an astronaut. I’ve pulled together some frequently asked questions here so we can get to know each other a bit better! Of course, if you have a question for me that isn’t answered here, head on over to the contact page and send me your questions. It might just end up on this page!

Did you dream of being an astronaut as a kid?

As a young boy, I always dreamed of adventure. My first adventure book was Wild Animals of North America, and I learned about exploring faraway lands from its pictures and stories. I also grew up watching the early NASA Mercury, Gemini and Apollo space missions, to include Apollo 11, the first landing on the moon by man. At that time, space technology was new, and it captivated the American public. It became part of our culture with television shows and movies about flying in space. I was swept up by the thrill of this new endeavor, fascinated by its many new aspects to include the thrill of flying a spacecraft, seeing sights never seen by a human and the new technologies that accompanied spaceflights, such as space suits, communication radios and the tools to live and work in space, such as jet-packs.

Growing up in Texas on the plains also afforded me the opportunity to see the vast night skies and the new satellites that migrated this panorama of starts from west to east. For a young boy, spaceflight presented all of the adventure and excitement that a young boy could desire. 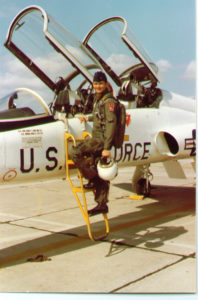 Did you have to leave the Air Force to join NASA?

I actually never had to leave the Air Force to go to NASA! The Air Force allowed me to serve America as an astronaut while still remaining an Air Force Officer.

I joined the Air Force because I knew the training I would receive as a pilot would be important for me as an astronaut. I worked very hard during my time in the Air Force so I could apply and be accepted into the astronaut program.

My time as an Air Force fighter pilot and test pilot are as important to me as my time as an astronaut. I served with many wonderful young men and women and am proud to have been part of America’s military.

How did your family feel about you going into space?

My family was thrilled, even if a bit nervous about my space flights. My wife was also an Air Force officer and aware of the risks in spaceflight. My daughters were young at the time of my space flights and were just excited to be part of the big adventure.

The week before launch week was so fun. Thousands of people come to watch the launch and the days before are filled with events, family gatherings, and parties. However, I was not able to attend as I was in quarantine to keep me healthy on my journey! However, launch day is so different from any other experience. As you can imagine, your family is always a bit nervous when it comes to sending you somewhere unknown where they can’t get to you easily, but my wife and daughters knew that NASA had many people working hard to make our launch safe. They were nervous and sad to say, “goodbye and fly safe”, but they knew how hard I worked for this and how much it meant to me. They were also proud of the rest of my crewmembers, NASA, and America. 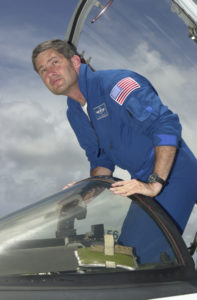 What experiments did you do in space? Which one was your favorite?

Our primary mission on my two spaceflights was to build the International Space Station (ISS). We did three spacewalks on each spaceflight to construct the big pieces of the ISS.

We did do experiments in space, but most of these were done on the ISS, not the Space Shuttle. My crewmembers who lived on the ISS experimented with growing useful plants in space under artificial light and exercising to understand how to stay healthy on long-duration space missions such as those America will do in the future, such as a mission to Mars. Maybe someday you will be one of those astronauts!

My favorite experiment was the release of an Air Force CubeSat on orbit to understand how two small satellites can float near each other in space. I had to release these small CubeSats at a precise time and position on orbit, so it took a lot of concentration to do it right. These CubeSats are small, only about eight inches long on each side. They were tied together by a tether and they spun around each other as they floated away from the Space Shuttle. I often wonder if they are still on orbit.

Are you allowed to bring stuffed animals to space?

Yes, you can, if they are small! At least that was what NASA allowed us to do on the Space Shuttle. There is not much room on the Space Shuttle, so every astronaut gets to bring some special things on orbit that are important to them. Space is certainly a lot more inviting when you can bring one of your favorite stuffed friends with you.

Our special friends will also be important when we do our long missions in the future. Although there is no plan to bring our pets with us on these missions, I know that some young scientists are investigating how to build “robotic” pets that can be your traveling companion. That is hard to imagine, but someday in the future, we may have “robotic” friends that can keep us company on space missions and remind us of our family and real pets back home on earth. 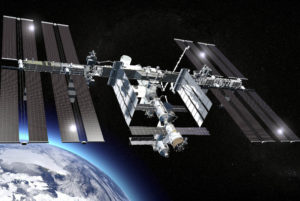 I have piloted two missions to the ISS and spent 26 days in space, and I can definitely say living in the ISS is interesting and exciting. It has many “modules” which can be thought of as rooms. There is the laboratory module for conducting experiments, the docking module used for rendezvous and even a cupola with big windows to sit in and watch the beautiful earth. It is fun to float from one module to the other and see all of the astronauts doing their work. Our Russian friends have their own living and working space and it is different from ours. I enjoyed “sitting” at their little table eating dinner with them. I even spent Thanksgiving one mission on orbit in the ISS and Space Shuttle.

However, things that we might ignore here on earth have a much larger impact when your home is in space! I remember being on the ISS and we suddenly heard a really loud noise. I looked to one of the astronauts who had been living there, and he smiled and said that he hadn’t heard that sound before. If you heard a weird noise at your house, chances are, you’d maybe poke around a bit to make sure nothing broke, but you wouldn’t worry too much about it, right? You might realize that it was a tree branch hitting the window, the house settling on its foundation, or something like that. But on the ISS, we had to think quickly and figure out what made the noise and ensure that nothing was wrong. Thankfully, it was a back-up piece of machinery that NASA’s ground crew had been monitoring and they knew it was going bad, so there wasn’t an emergency. If you want to hear more about that experience, you can head over to my Adventure Log to read more!

How long do you think it will take until NASA starts doing commercial trips to space?

NASA is a government agency and supported by your family since your parents pay taxes. NASA is not allowed to commercialize space to make money. That is also true for the National Oceanic and Atmospheric Administration (NOAA) that watches over America’s weather and air and the Department of the Interior which manages America’s national parks. These federal agencies work to serve all Americans to include you.

However, NASA is organized to explore, and what we learn will be used by private and public companies to commercialize space. There are many companies that are trying to find ways to live and work in space to better our lives here on earth. You may be familiar with some of these such as SpaceX and Blue Origins. There are many other small companies also wanting to commercialize space and grow into big companies. Some of these are in medicine or communications. It won’t be long before many more companies are using space to make life better here on earth for each of us. You might work for one of these companies someday.

Do you think we will ever colonize Mars and how long do you think it will take us to get there?

There are many really smart people working to get us to Mars right now, but it will be difficult to do and there is so much to learn before we decide to go there. That is why astronauts are living now on the ISS and why NASA is planning on returning to the moon in the next few years. Living on the ISS and going back to the moon will allow us to practice and train for a mission to Mars. Before we go, we have to learn how to live safely on Mars and return to earth safely. There are certainly some big hurdles ahead, but with our best and brightest on the job, it will happen. Maybe someday one of those people will be you!

Do you ever foresee yourself returning to space?

I’m retired from the Air Force and I am not training as an active astronaut anymore. NASA has a new team of astronauts to do the upcoming missions. They are also selecting new astronauts in the next year or two. So, while it isn’t impossible for me to return to space, it is unlikely. I don’t want to say “never” though. I recall meeting senator and astronaut John Glenn when I became an astronaut. He was one of my heroes as a young boy as he was the first American to orbit the earth. In 1997 he flew on the Space Shuttle so NASA could investigate how he adapted to spaceflight at his age. So, one never knows. Traveling to space requires a lot of concentration and your body must be in good shape. If I wanted to return to space, I’d have a lot of work to do to understand the new technologies currently being used by NASA, and I would have to exercise very hard. Right now my wife and I own a company and we are helping build technology for our soldiers and this is exciting enough for me!