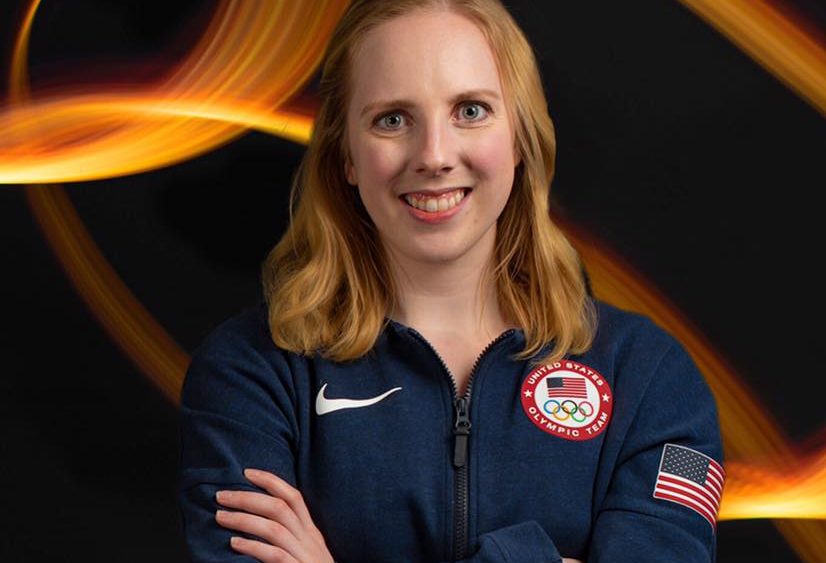 Shooting for Gold: A Conversation with Olympian Ginny Thrasher

What an exciting and interesting conversation I had with Olympian Ginny Thrasher! Our time was filled with stories of gold medals and life lessons. I had so much fun that I wanted to write down some of the advice Ginny gave us. It’s not every day a gold medalist becomes your personal coach and trainer! You can also view and comment on this video on Facebook.

Ginny paused in her conversation with us when I asked her to share a piece of advice she received that she’ll never forget. She then quickly smiled and said her mom told her something that she carries with her today. Her mom said, “It takes a village,” meaning, one does not succeed in anything important without the support of family and friends. In her case, her path to becoming an Olympian was filled with her family, friends and coaches who believed in her and made changes in their lives to help her succeed. She reminded us we must be thankful for these people who support us everyday as we learn in school, play sports, become proficient in a musical instrument, and pursue those things that interest us. It might not always seem so, but the rules and guidance that comes from our parents, teachers, and mentors is shared to help us achieve our own adventures!

I challenge each and every one of you to spend 30 seconds a day reflecting on who is in your “village” and how you should be grateful.

Ginny discussed her passion for shooting and how she didn’t find this until she was in 8th grade.  Everyone has a passion. It may take time for you to find yours, and that’s okay. It could be a sport, an instrument, or a language, but everyone should find their passion and give their all to it. Whatever it is, and your passions may change over time, work to become the best you can at this skill or work. It may be as simple as taking care of your pet. If that is your passion, strive to care for it the very best you can.

Ginny also said we learn through education and through experience. You are learning in school now and will continue to learn throughout your life, whether you are in school or not. For example, Ginny’s experience taught her where she could excel. Ginny was interested in becoming a figure skater, but quickly realized she did not have the skills to excel in this sport. However, another door of opportunity quickly opened up and she knew she had found her passion – sharp shooting.

Quickly, she became very good and realized she could try out for America’s Olympic team. However, she also knew it would take dedication and work. As she said, she was apprehensive and nervous thinking she may become an Olympian. She believed in herself and knew that if she just did her best, she would have no regrets about the outcome. You see, it is not always about reaching your goal. It is often more about what you learn about yourself as you strive for excellence. Fortunately for you and me (and America too), Ginny chose to try. Moreover, she succeeded beyond her expectations. She would never know her inner confidence and desire to excel if she had not decided to “go for it.” So, this means you should not be afraid of not succeeding. Something that is important to you should be something you strive to excel in. Don’t choose not to pursue your dreams just because someone tells you it will be difficult! It would have been easier for Ginny just to do her school work, but she made the decision to try out for the Olympic team!

Like Ginny, I also had naysayers who said it was too difficult to become an astronaut. Many times, that naysayer was my inner voice. Back then, I often thought about my career as a pilot in the Air Force and the many friends I had in the squadrons. It was daunting to say I wanted to try and become an astronaut. I knew the competition was stiff and I would leave my good friends and a promising career. “Why not just be happy with what I was doing,” I often asked myself before applying to NASA. Thankfully I made the decision to try. My closest friends and family supported me. I too was successful, but had I not been selected to become an astronaut, I know I would have been just as content trying to be the best test pilot in the Air Force. Dr. Brian Williams also had to make his tough decision to try and become a doctor. If he had not done so, then he would not have saved those police officers in Dallas in 2016. (By the way, did you know that  Dr. Brian Williams traveled to see my shuttle launch in Florida? Even though I didn’t know he was there, he still came to support me. What a good friend!)

Even an Olympic gold medalist has doubts! Ginny Thrasher had times where she had doubts about her career and her abilities, and that is totally normal. What is important is that you continue to believe in yourself and work hard. Ginny Thrasher turned to her support team for guidance which is a great tool! Our family, friends, and the people around us are great resources.